This article assumes you have the code in place from that earlier article.  In particular, it assumes that you've got the code in place to establish the context for the API calls, read a list of the available smart card readers and close the context once we're done interacting with the readers.

Now that we have the structure defined, we can declare our local external function:

Next, let's look at the code that calls it.   We're assuming here that we've already established the API context and obtained a list of readers on the system from the code in the previous article.

Some things to note:

As this code is written, the eventstate attribute of the structure will tell you the current state of the reader.  Here's an example from my system: 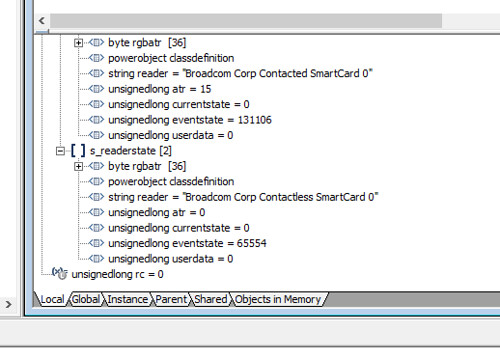 The eventstate value needs to be interpreted as an 8 character hexidecimal value.  The first half of the value (first 4 characters) is a count, the meaning of which depends how the call was made.  For our purposes, we don't care about that value.  The second half (last 4 characters) contains the status information we're looking for.  More details, including the values for the flags for the second half of the value can be found at: Reader State.

What I'm not showing here is parsing the values, tracking the status of each reader, and using a timer event or timer object to re-evaluate the status on a regular basis.  I'm assuming the reader can take it from here.