Hi, we are in the process of upgrading from Powerbuilder 12.5 to Powerbuilder 2021. I have found that when I attempt to build a 32-bit Pcode build from the IDE or the Compiler, the build succeeds, but then I'm left with a "Create of executable file failed" error and the pbd files have been created, but not the executable.  If I keep everything the same, but switch to a 64-bit build, it successfully creates the executable.  A coworker can take the same migrated code and do a 32-bit build on his machine and the executable file is successfully created.

My question is what do I need to do to successfully create the executable file for a 32-bit build?  I have been through all of the suggestions of the icon not being valid, a trailing space in the pbr file, a leading 0 in the version information, but still get the error, even if I try to build a test app that has one window.  I have also removed all versions of Powerbuilder and wiped the registry of any mention of Powerbuilder, Sybase, and a few other related words, and reinstalled just Powerbuilder 2021 multiple times.  Note:  Even building with an evaluation copy of PowerGen returns the same error.  I have also taken the same steps on my other laptop which is also connected to the same utah.gov domain and I get the same error.  Note:  I am an administrator on both machines.

Can someone please put me on the track to what 64-bit dll or other file I need to replace with a 32-bit version to be able to successfully create a 32-bit build?  Thanks

Tweet
Spring4Shell, is it used?
Appeon PowerBuilder and InfoMaker Security Vulnera...
Who is viewing this page

I just want to report that I finally have a solution for the "Create of executable file failed" error.  It turns out that the State of Utah's antivirus program called Comodo was quarantining the pbcgr.dll file.  This file is found in "C:\Program Files (x86)\Appeon\PowerBuilder 21.0\IDE\pbcgr.dll".  Creating an exception for the file resolved the problem.

I had long ago done testing to see if it was Comodo by turning it off and then trying to build, but it still failed.  What I didn't know at the time was that the file had physically been moved from its folder to the Comodo quarantine folder and was thus missing when it was needed to build the application.  On my last round of testing, I noticed the file was missing from the folder, so I uninstalled and re-installed Powerbuilder, and then, with Comodo uninstalled, it worked.

I really do appreciate all the suggestions and help from the Appeon user community!  I'm just glad the issue is finally resolved and we can get on with real work.

Congratulations, Troy, for determining the root cause of this issue! Would you please take a moment and mark this issue as resolved? Thanks!

Thanks for sharing the solution!
There are no comments made yet.
Responses (10)

I didn't notice this in any of the replies, but...

I've seen this error if there are bad resources in the build, the application icon or resources on PBRs.  Try removing these and if the problem clears.  If so, you'll just need to isolate the offending resource(s).

Thanks for responding, Phil. I have actually removed the PBR file and icon even though I went through the PBR file and verified that there are no leading or trailing spaces on any line. The build works if I switch it to 64-bit, so I'm thinking it has got to be something to do with prerequisites or DLLs like Miguel suggested. I appreciate the suggestion, though. Thanks
There are no comments made yet.

I. Since you say you have a colleague who hasn't got the problem, copy all of his code and try again

2. Check which pre-requisites pb2021 needs and make sure they're all there (since it works for 64 bit, I'm thinking maybe some 32 bit framework, c++ runtime or windows sdk if that's still a thing nowadays).

3. As weird as it may sound. In the past there were moments in which I couldn't compile from the project (it would blow up, no error message), but ... doing rightmouse click and choosing 'deploy' worked fine). Might be worth trying again, now that you have a project object in the library.

4. From an administrator command promp (some users have fixed problems doing this):

5. If nothing works: I think it would be better to create a support ticket for a question like this: https://www.appeon.com/standardsupport/newbug

Sorry for the slow response, but I got busy and haven't been able to work on this issue for the last day.

The strange thing is, I gave my coworker my source code and he was able to build with it on his machine. But, I believe he used a machine that is not in the domain like both of my machines are, so I'm thinking there might be something blocking me that way.

I also agree that it is likely some 32-bit prerequisites that are missing and that is where I'm going to focus next. I tried the disk cleanup and scan as well as right-clicking on the project file without opening it and choosing Deploy, but still got the error.

If I can't figure this out, I will go with your suggestion and put in a support ticket.

I really, really, appreciate the helpful comments that you and others have provided on this issue. You are all great people!!!

I had the same issue: "Build of EE failed".

It turned out to be a bad object in the code.
To find such an object that seems to be OK but it not, open each PBL, select each object one at a time, and REGEN it. The bad object will fail.

Yes, this is a slow and annoying thing to do, but it was the only way I found the bad object.

Yikes, that is over 5000 objects to open, but you may be onto something because we do have a few objects that have had corruption issues over the years. I'll start there, but it sure seems odd that I can build 64-bit successfully . . . just not 32-bit. Thanks

Good luck, and I hope this helps to find the issue. :O
There are no comments made yet.

The "yyyyyyyy"s in the project are coming from telling it to create pbd files (it adds one "y" for each pbl in the target). I pasted in your modified parameters and as soon as I attempt to save or just build, it automatically updates and adds all of the "yyyyyy"s back in.

Ah that explains! I didn't use more than one PBD in my own example project, that's why I didn't notice them, but indeed ... there's also one 'y' in my example.

Thanks for clearing that up!

Sometimes I get an executable build failed when my pbt file or the main pbl (where the application object) is. Now to be on the sure site do this:

- make a full copy of everything (also just in case source control might need these write protected attributes).

- right click on the main folder in the file explorer of windows (make sure pb is closed first) and go to "properties", uncheck the "readonly box" and apply to all sub folders.

- try again to build the executable.

I am familiar with the "readonly" issue as our refresh command file pulls "readonly" copies of the source objects into the folder in File Explorer. It is part of our normal process to uncheck the "readonly" box and apply to all subfolders after doing a refresh, but I liked the idea, so I did make a copy and perform that process before doing a build, but still got the same error.

I really do appreciate your efforts in helping me get past this issue!

yw, have you tried "optimizing" all the pbls?

Yes, I have optimized and regenerated everything multiple times.
There are no comments made yet.

Try taking them out and use this instead :

Hi, and thanks for responding, Miguel.

I also thought it might be that I don't have write access to the output folder for the exe, but I have tried other builds pointing to folders where I know I have write access and still get the same error, and it works to just switch to a 64-bit build and write to the same folder.

We are using a project and I have uploaded a picture of the project settings that includes the error from the build I just tried.  The parameters were not all showing, so I have pasted them below:

One thing to note is that when I first tried with my migrated code . . . if I right-clicked on the target and chose Deploy, I would get a message that said no deployable projects were found and asked if I would like to create one, even though I had a project object in the target.  I ended up creating a basic new one and using that to build with.  It has no .pbr file and no icon selected.

Here's an example of my own little project:

Where the HECK are all of these "yyyyyyyy"s coming from in your project?

Try taking them out and use this instead ! 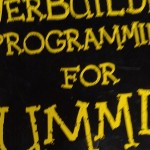 I had this same issue when the project I was using was attempting to write the exe to a network shared folder.  When I changed to a local folder it went fine.  From that I assumed it was a permissions issue.

Thanks for responding, Matt! I agree that it sure seems like a permissions issue, but I am writing to a local folder and I don't get why a 32-bit build fails writing to the folder, when a 64-bit build works in the same folder. I do appreciate the help. Thanks
There are no comments made yet.

Things I can think of: You don't have access rights for the output folder of the EXE. Or, there's already an EXe and it's 'read only'.

How are you generating the exe? Using a project or Powergen?

Show us a picture of your project settings?