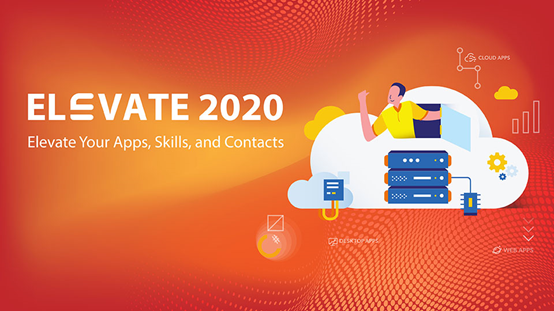 Well, this year's conference was definitely different.  As a result of COVID Elevate 2020 was entirely online.  In other words, no breakfasts, lunches, evening events, happy hour, etc. so they won't be part of the review this year.

I thought it went quite well, particularly given it was Appeon's first attempt at doing an entirely online conference.

Registration was done entirely through the Appeon website.  The course catalog allowed you to see the session schedule and select those you wanted to attend.  You could then download a calendar invite that you could use in your own calendar to remind you which sessions you wanted to attend and when they started.  I had some issues with that when the catalog was first released, notified Appeon, and they had the website corrected by the next morning.  About the only thing I would ask they add is the ability to select several sessions and then be able to download a single calendar invite file that contained all the sessions.  Instead. I had to download separate invites and import them one by one into my Google Calendar. 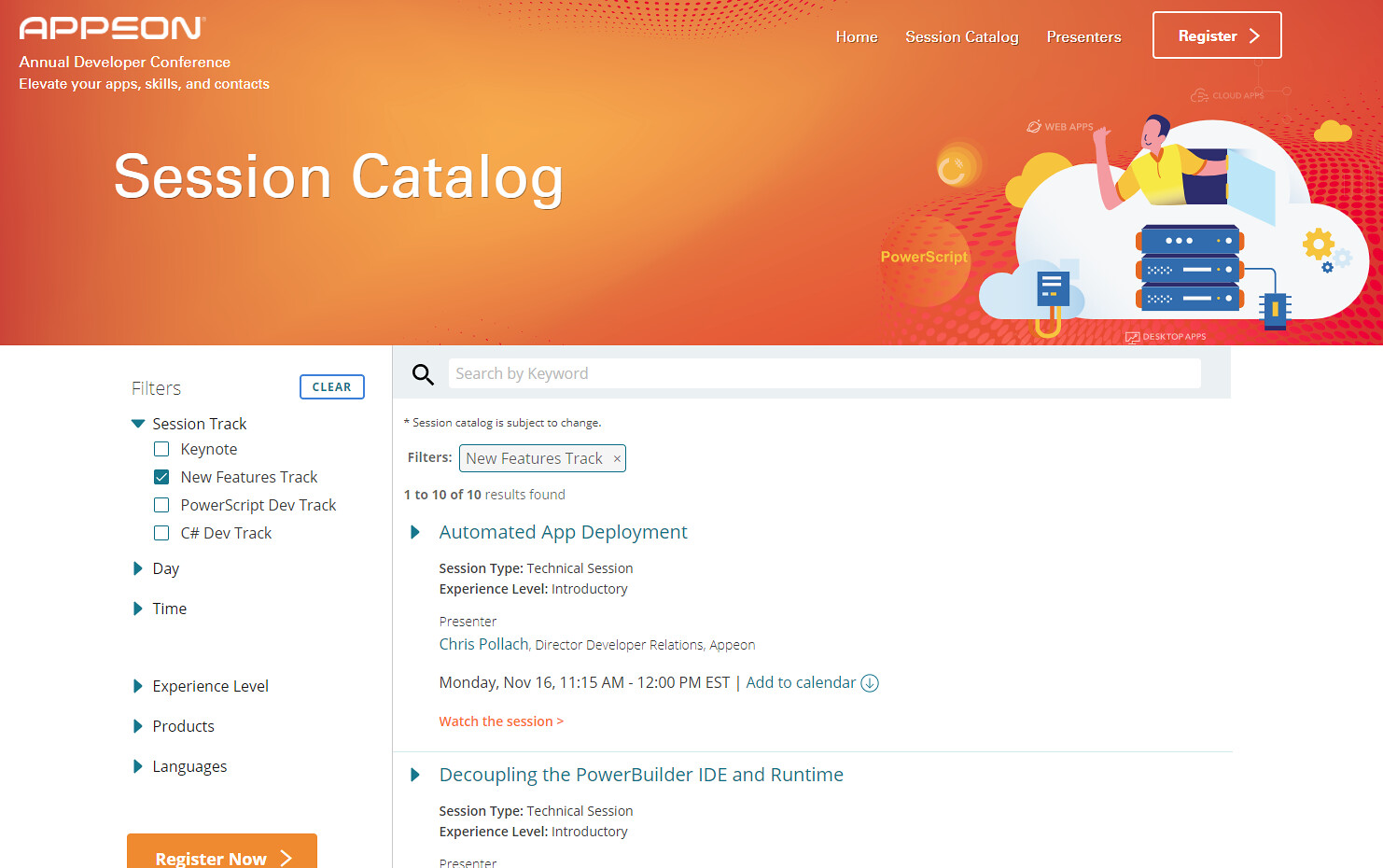 Armeen Mazda talked about what PowerBuilder is (primarily a tool for generating Windows clients), and about the PowerBuilder user base which he broke down into 4 groups based on their needs and how Appeon is addressing them: 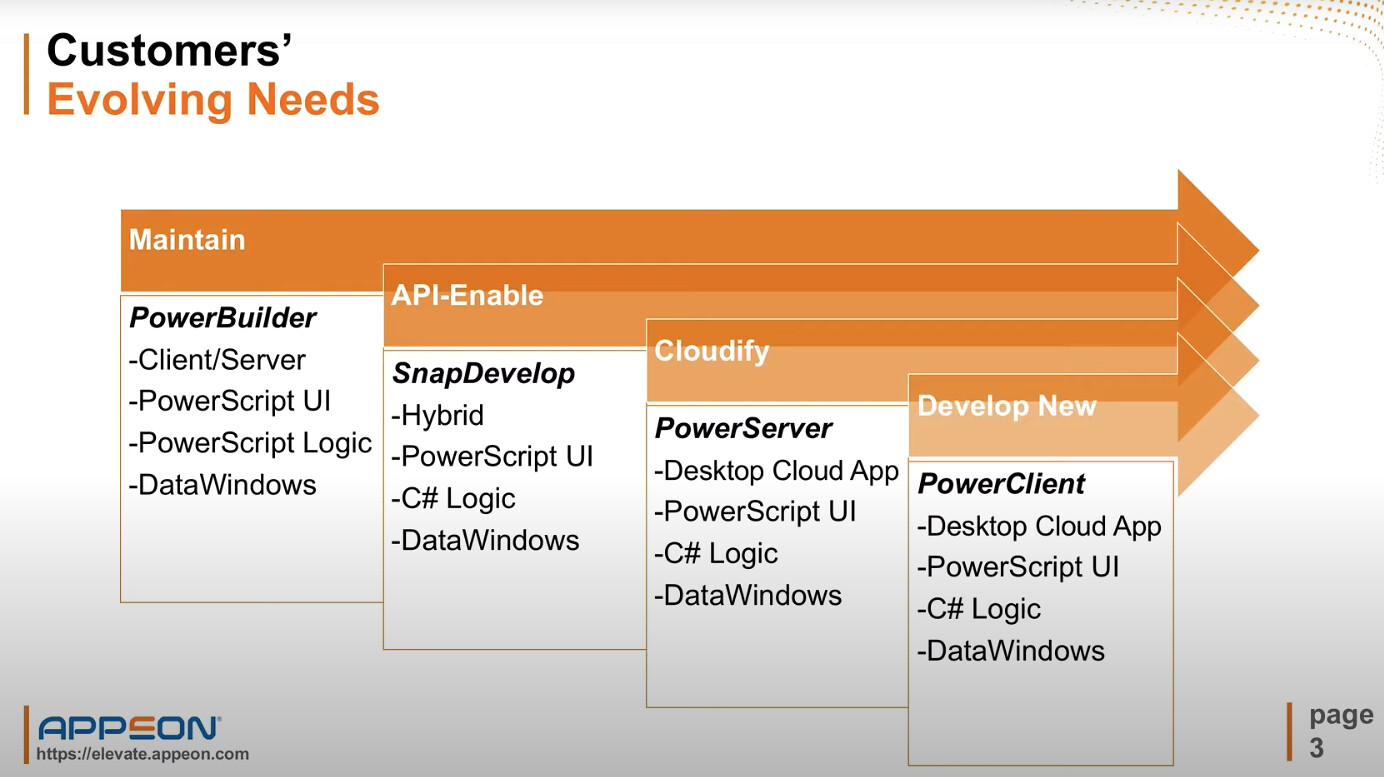 Marco Meoni then did a demo of an application that was converted over to REST APIs and then a front end was developed for it using popular JavaScript frameworks.  He demoed it using Safari running on a Mac and then on his iPhone.  (He had a 2 hour technical session later in the conference in which he gave a tutorial on building such applications).

Armeen then gave a detailed explanation of the retooling of PowerServer that will result in PowerServer 2021.  The new version allows for cross-OS deployment server side, provides close to 100% support for PowerBuilder features, and runs a Desktop Cloud App on the client rather than attempting to run as a web app in a custom browser plugin. 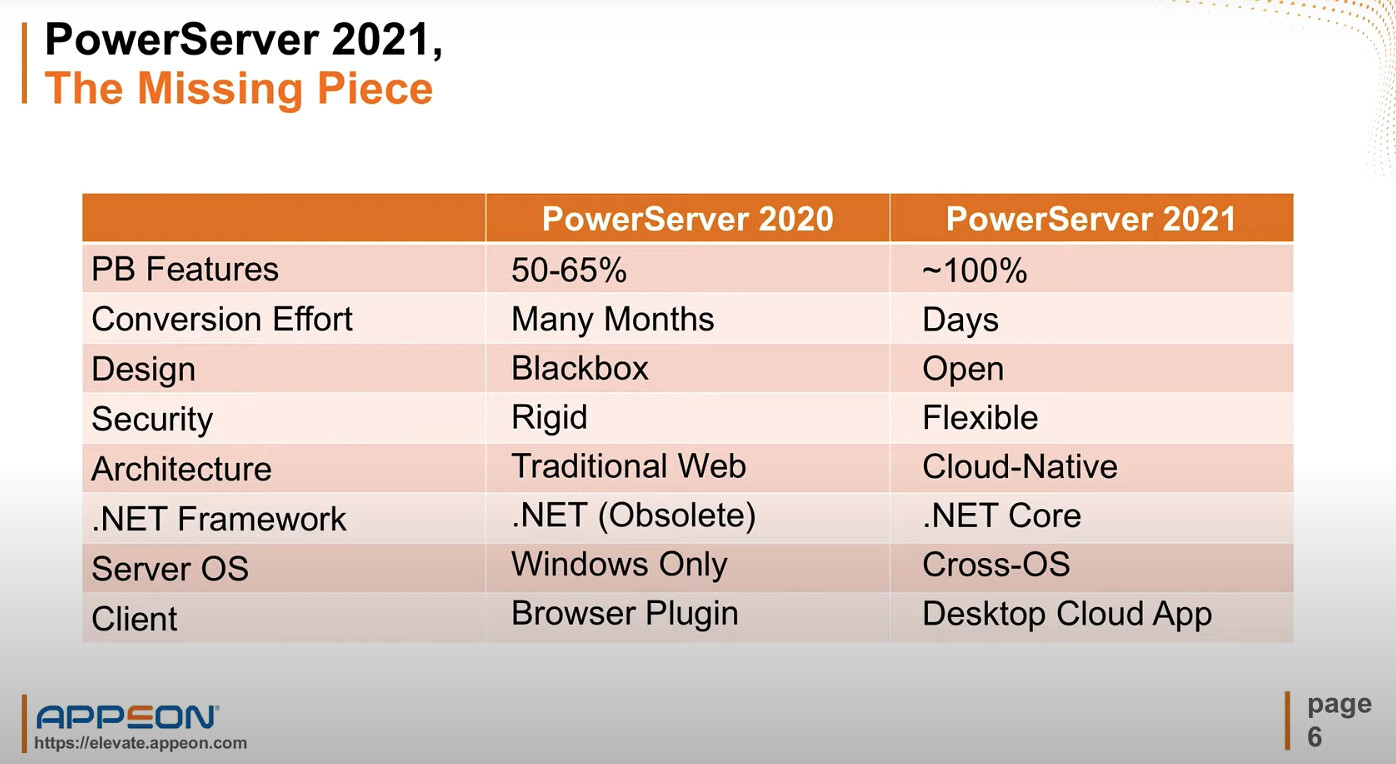 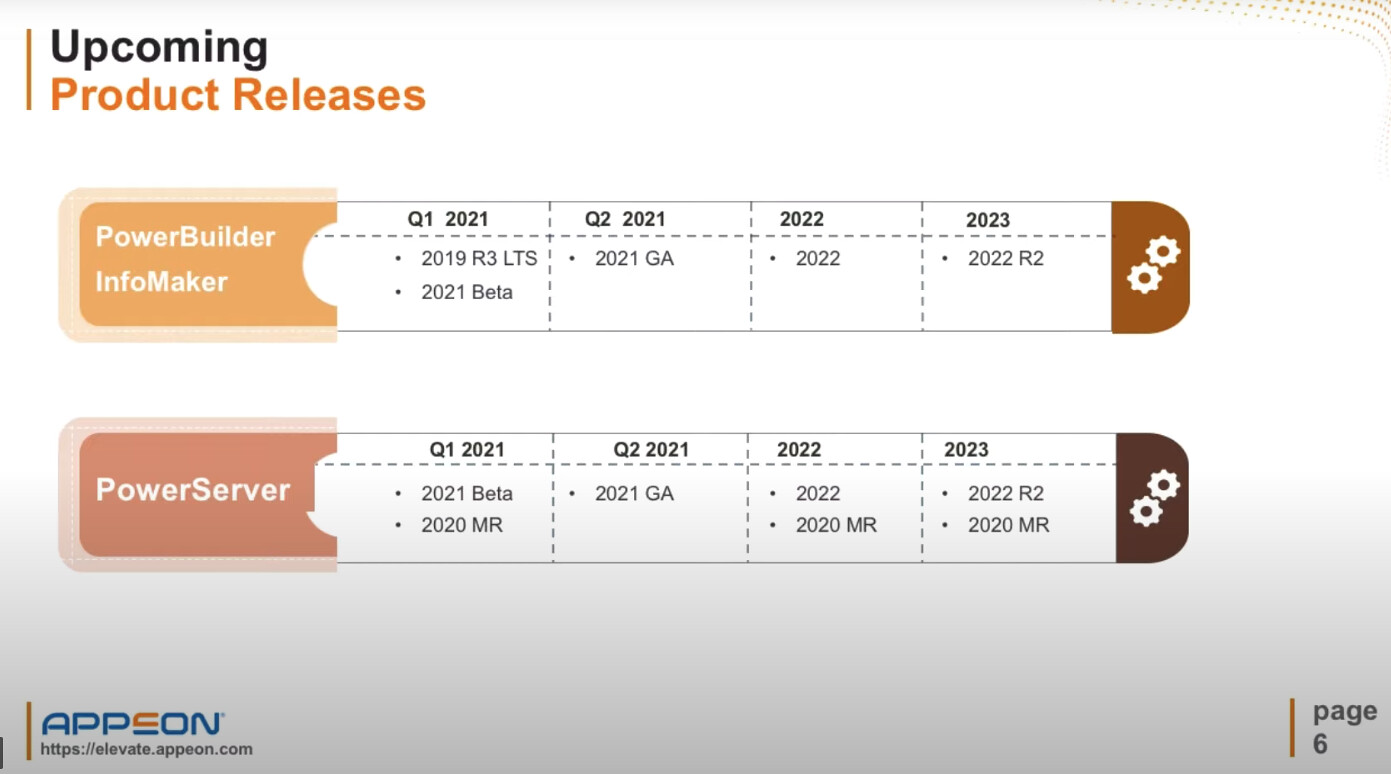 Julie then talked about the PowerBuilder roadmap.  There are four major categories Appeon is working on:

Julie reviewed the results of a survey of PowerBuilder customers they did earlier in the year.  There was also a video showing their Japanese partner operating a large booth at the Japan IT week convention in Makuhari.

Govinda Lopez then overviewed the major enhancements in 2019 R3 and then demoed several specific ones, namely:

Finally Armeen and Julie went through a list of questions that had been gathered beforehand from conference registrations and provided answers.

There wasn't so much an app this year as a website.  Once the conference started you went to the Video Streaming Center and clicked on the icon to start streaming once the session you were interested in began.  The Keytones don't appear in this screen shot, they're above the Technical Sessions.  This screenshot was taken on the second day of the conference, and note that the sessions from the first day area already available for replay.  That's great in case there was a scheduling conflict between two sessions you really wanted to see, because it meant that you could go back and catch the one you weren't able to see the next day.  About the only thing I would have wished for here would have been the ability to display the session times in my own time zone.  Note that they're all in EST, and I needed to convert my time into EST to figure out what was currently about to start. 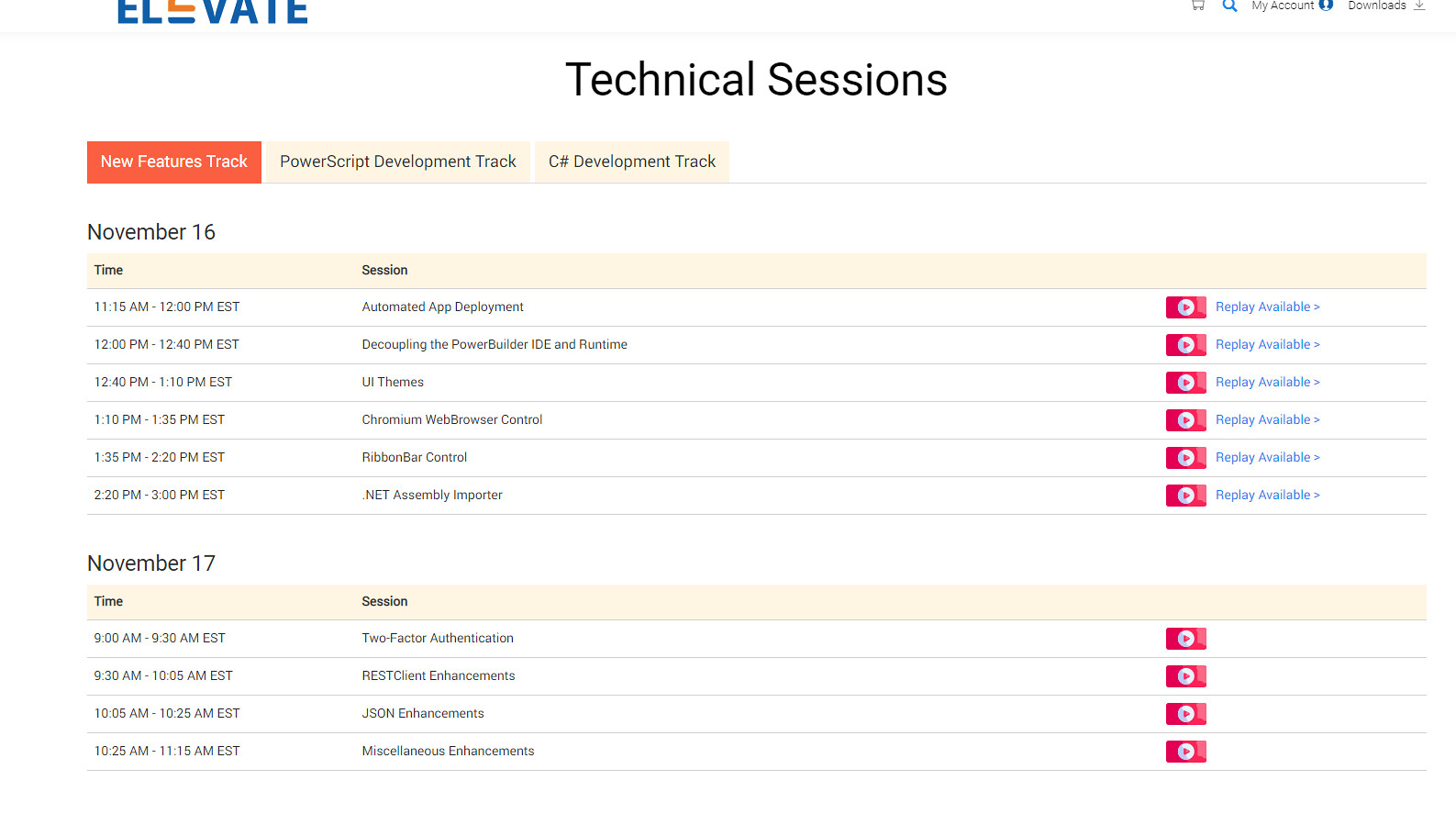 Once the session began you would see and hear the presenter and you could also chat with the other people watching the session.  I tried to participate in the chat for as many of my own sessions as I could.  And those sessions I did attend by other presenters those presenters participated in chat as well. 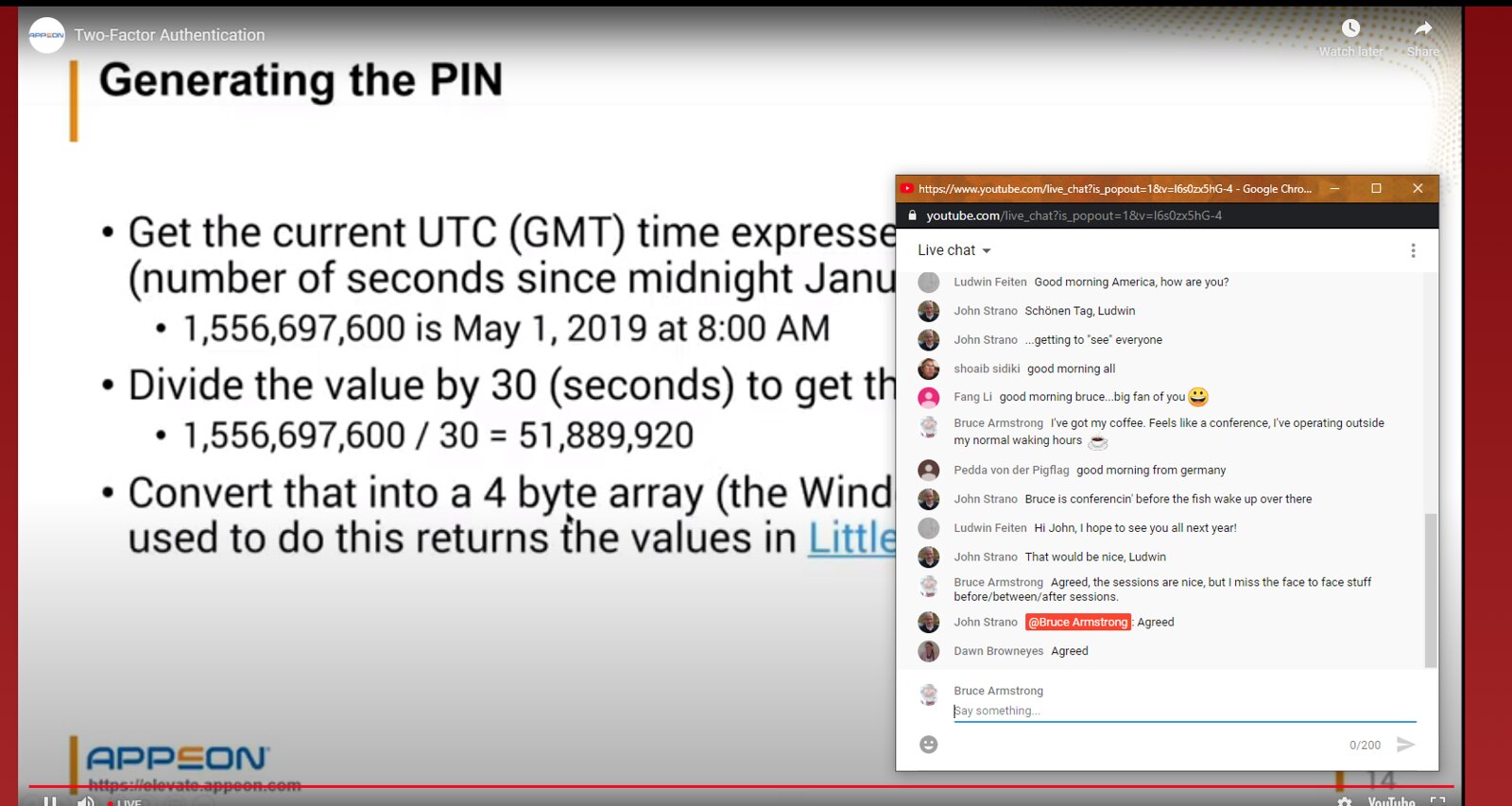 The one issue I did notice is that my video feed seemed fuzzy.  You might notice it a little bit in the image above, and it became more evident when a slide contained a screen shot or views of the IDE during live demos.  After the conference when I went back and to watch one of the replays I noticed that the video resolution that YouTube player was using was 480p (SD).  (The Live Streaming was done through YouTube as well).  I believe what happened is that back when the pandemic started YouTube made that the default setting for all videos.  I don't spend much time on YouTube, and the things I do watch there (mainly reviews of technology products by TechMoan) probably don't look a whole lot different in SD and so I didn't notice the difference.  So I was probably still defaulted to SD during the live streaming, which resulted in the fuzzy video.  In particular, note that in that screen shot from the live feed that the HD indicator isn't showing on the settings button, which I believe means I'm viewing it in 720p or less.  Once I changed the setting back to 1080p60HD all the replays looked razor sharp.

Another recommendation I would have for Appeon would be to include a few minute breaks between sessions.  If you look at the schedule from the second screenshot above, you'll see that as soon as one session ended the next session began, at least in the same track.  If you were jumping between tracks it would have been less of an issue, because the sessions all have different lengths and so the starting times varied between tracks.  But if you were staying in a single track there wasn't much room to get a bite to eat or a bio break.

The one thing I really missed at this conference is all the face-to-face interaction I would have with people during the non-session times of the conference (the breakfasts, lunches, evening events, happy hour, etc. that we couldn't have).  The chat made up for that a bit, but it was only available during the sessions.  I was thinking that having one more general session at the end of the conference with chat would have given a better feel to the end of it.  Towards that end, Appeon has created a separate Elevate discussion section in the Q&A area of the Appeon Community website to allow post-conference follow up conversations.