This tutorial has discussed how to interface traditional, Windows-hosted PowerBuilder 32-bit and 64-bit applications with the Windows Application Programming Interface (API), also known as the WinAPI. In the first three parts, the groundwork was laid to make you more knowledgeable and comfortable coding External Function Declarations (EFD's) and understanding the nuances of how information is exchanged between PB and Windows API functions. Part four contains a list of coding tips and techniques and mapping tables to help you with the translation between many common WinAPI datatypes and the standard PB datatypes. It also describes a free PB sample application and non-visual user object that can dynamically determine the memory size and layout of a structure in either 32-bit or 64-bit environments.

PowerBuilder does not currently have a “SizeOf” function for returning the amount of memory required by a standard datatype or a structure. The ability to dynamically determine the size of a structure would be very helpful in setting the “size” member required in some WinAPI structures, particularly if it could take into account structure member boundary-alignment padding and other conventions for both the 32-bit and 64-bit environments. Review part two of the tutorial for a refresher on structure member boundary-alignment padding.

Roland Smith provides a free PB code sample (named “SizeOf”) on his TopWizProgramming.com website for calculating the size of a structure. The calculation logic is contained within a single non-visual user object that was originally authored many years ago by Rui Cruz. Roland enhanced the original object to handle the datatypes added to PowerBuilder in version 12.6. With Roland’s permission, I’ve made several additional enhancements to the object:

With this newly-enhanced object it is now possible to determine the size of PowerBuilder structures at execution time, even if PB creates a temporary, behind-the-scenes version of the structure to satisfy the progma_pack( 1 ) directive specified in an EFD.

There are, however, a few caveats:

With Roland’s permission, I have posted in the CodeXchange section of the Appeon Community this enhanced version of his SizeOf utility and the accompanying Structure Layout sample application. 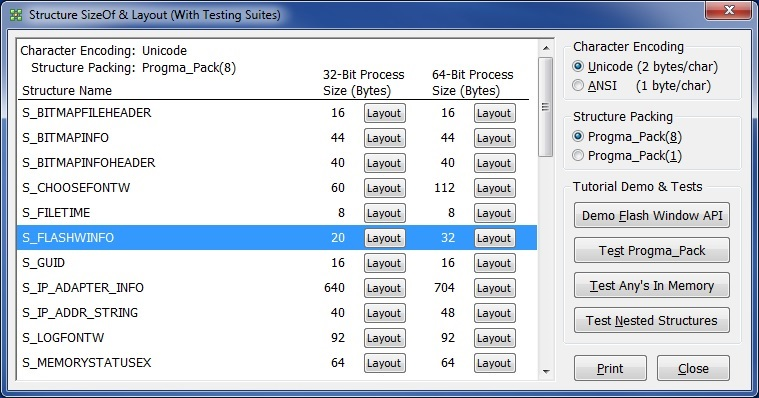 The Structure Layout sample application was developed in PB 2017 R2 and can be compiled into either a 32-bit or 64-bit executable. It has been successfully tested in PB 2019 R2. 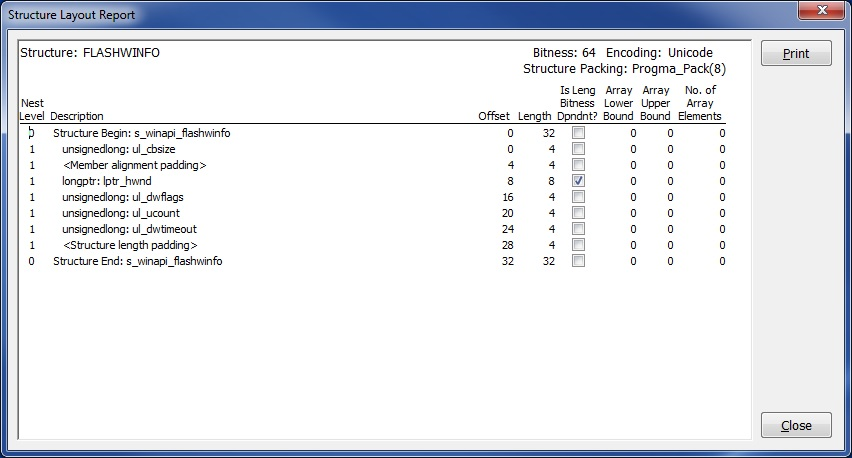 The sample application can perform four test suites related to topics covered in this tutorial:

Coding Tips and Techniques For 32-Bit and 64-Bit Applications

The following compendium of tips and techniques (many of which have been discussed in the tutorial) can help you interface 32-bit and 64-bit Windows-hosted PowerBuilder applications with Windows dynamic link libraries:

I have a top-level bookmark menu in my browser named “Win API”. Here are the URL’s I’ve found to be most helpful:

Appeon’s PowerBuilder documentation (which you can access online) contains helpful information about how to define and use external functions. Here are two documents and the drill-down to the pertinent information:

What is the memory size of a Boolean in PB? A Double? It would be nice if PB provided a SizeOf operator similar to C/C++, particularly for use with structures.

Over on the Windows side of the aisle, what is the memory size of a WORD in the WinAPI? An LPARAM (Long message parameter)?

Type definitions have run amuck in the WinAPI. A primary reason for using type definitions is to convey context and categorization to data values (to which I applaud) and if I coded in the WinAPI extensively I likely would not have trouble remembering the underlying datatype of a DWORD, for example. But I do have trouble remembering, and you might struggle with this, also, so the tables in this section and in the next section can help.

The following table lists the memory size (in bytes) of the standard PB datatypes. Any PB datatype that does not have a standard WinAPI datatype equivalent is noted.

The online documentation that describes the various type definition datatypes used in the WinAPI is the authoritative source for this information. Even though I listed the URL above, for convenience I've included much of that list here:

The following table lists the PowerBuilder (version 12.6 and later) equivalent for the some of the most common WinAPI datatypes:

We've learned how to code External Function Declarations (EFD’s) in PowerBuilder, as these are necessary in order to call exported entry points in “external” (to PowerBuilder) dynamic link libraries such as the WinAPI functions and third-party DLL’s. The means for invoking external functions using either Unicode or ANSI character/string encoding was described. ANSI encoding was included because DLL’s from third-party vendors may not support Unicode. We saw that passing argument values by reference to WinAPI functions is common practice, particularly when an argument is a structure, because a passing a pointer (memory address) can be much more efficient than passing the structure data (by value) through the call stack.

In part two the topic of boundary alignment was introduced; the reason it exists and the 8-byte alignment convention used by Windows and by PowerBuilder. Fundamental differences between Windows’ 32-bit and 64-bit environments and how the Longptr datatype in PB helps to mitigate those differences were covered. The effect of boundary alignment and 32/64-bit differences on structure layout and size were examined because some WinAPI functions require the caller to accurately specify structure length. Single-byte (or 1-byte) alignment was described as an alternative that some non-Windows DLL’s utilize. The optional progma_pack( 1 ) directive in an EFD allows PB to interface with DLL’s that uses 1-byte structure packing alignment. WinAPI functions all use progma_pack( 8 ), or eight-byte boundary alignment, which is what PB uses by default.

The third installment of the tutorial focused on several nuances of the use of structures in the interface between PB and Windows and in particular, how PB null variables and the PB Any datatype can adversely affect this interface. Although the Any datatype can be used in WinAPI function calls in a limited manner and with considerable care, we examined the potential dangers of using Any’s and described the circumstances where using Any’s simply does not work.

Finally, several coding tips and techniques were listed and mapping tables for translating between many of the common WinAPI datatypes and standard PowerBuilder datatypes were presented.

I’m very grateful to Armeen Mazda and everyone at Appeon for rescuing and resuscitating a languishing yet unparalleled product named PowerBuilder. You are the reason the future for RAD looks bright!

Roland Smith does many great things for the PowerBuilder community. He graciously gave me permission to post the source code for the free sample application that accompanies this tutorial, since it is based on his “SizeOf” code sample he makes available to all on his TopWizProgramming.com web site. Many thanks, Roland!

Andrew Barnes cast his critical eyes on the initial version of this tutorial and graciously offered his observations and suggestions for improving the content. Several of the revisions I've made are a direct result of his involvement. Thank you, Andrew!

I’m especially indebted to Chris Pollach, who used some of his valuable time and energy to review the original version of this tutorial and improve it with excellent corrections and suggestions. Thank you, Chris!

The following changes have been made to the original version of Part Four: 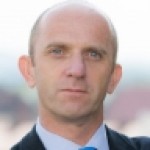 Excellent series of articles, thanks a lot, John.

There is one bit I would like to mention: although Windows uses 4 and 8 Bytes for handles in 32/64 respectively, it uses in fact only the 32 Bit portion of it even in 64 Bit Windows: https://docs.microsoft.com/en-us/windows/win32/winprog64/interprocess-communication.

I first thought that this piece of information might lead to not having to change Long to LongPtr in EFDs for 64 Bit support, but on second thought this might lead to some nasty memory overwriting issues.

Thank you, Roland, for taking the time to pass along your kind words and comment. I had not seen the inter-process communication topic until you pointed it out, and what it describes make sense.
Using the PB Long or ULong datatypes for WinAPI handle-related argument values in a 64-bit process seems to work ok in many cases. but I don't advocate doing it. I'm strong proponent of using the proper datatype, and using Longptr makes the topic a non-issue, so it makes perfect sense (to me, at least) to use it in both 32-bit and 64-bit code. Then, over time, repeated usage becomes a habit.
One area where using 32-bit integer datatypes in a 64-bit process is more likely to result in problems is when the WinAPI handles are contained in a structure, because the potential impact of differences in the alignment of structure members in memory and the overall length of the structure can be significant. As you imply, "bad things" may happen.