In a previous blog post I ran through a example of how to use the new command line compiler feature of PowerBuilder 2017 to perform continuous integration using Jenkins and a Git repository.  One of the "next steps" I referenced in the close of that post was the creation of a plug-in for Jenkins that would make creating the build steps for the project much simpler.

Well, I've created such a plugin.  Or more specifically what I did was take the existing MSBuild plugin and customize it to create a number of plugins to do PowerBuilder compiles instead.

In this post I'm going to look at how we can use those plugins, plus some additional changes I've made to the project in Jenkins to make better use of the capability of Jenkins and other Jenkin plugins.

The first thing you'll need to do is grab a copy of the OrcaScript and PBCompile plugins.  What you'll need is the orcascript.hpi and pbcompile.hpi files.  There are different versions depending on the version of PowerBuilder you are using

Go into Jenkins and select the "Manage Jenkins" option, and then the "Manage Plugins" link on that page.

On the Plugin Manager page select "Advanced" and then look for the "Upload Plugin" section. Click the "Browse" button there and navigate one of the HPI files you downloaded. 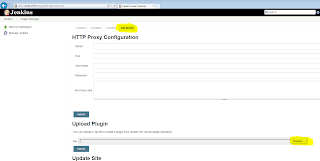 Do it again for the second HPI file.  You'll may need to restart the Jenkins server after installing the plugins before you can use them.

After the server has been restarted go back into "Manage Jenkins" and then "Global Tool Configuration".

Scroll down that page an you'll see a new "Orcascript" section.  Select the "Add OrcaScript" button.

In the form that appears, provide the installation with a name and the path to the OrcaScript executable (orcascript170.exe, or orcascript190.exe).

Scroll down the page a bit more and you will see a new "PBCompile" section.  Select the "Add PBCompile" button as before.  In the form that appears,provide the installation with a name and the path to the PowerBuilder command line compiler (pbc170.exe or pb190.exe).

Go back into your PowerBuilder project and select the "Configure" link. 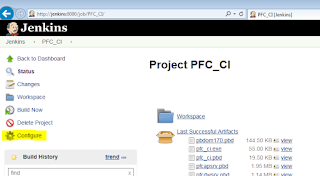 Delete all the previous build steps that called batch files.  Now add a new one and notice a new entitled "Create PowerBuilder PBLs from source code".  Select that one. 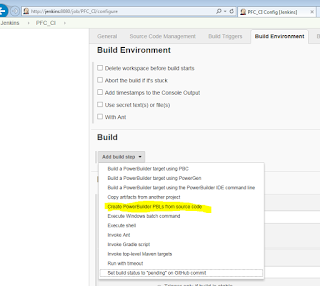 In the form that appears, select the version of the OrcaScript installation you just created and provide the relative location to the PowerBuilder project file.  If you have PBDs in the library path that you want OrcaScript to ignore, provide them in the Exclude Liblist option.  The open source PFC contains a reference to the PBDOM PBD, so we're excluding that here.

Add another build step and this time select the "Build a PowerBuilder target using PBC" option. 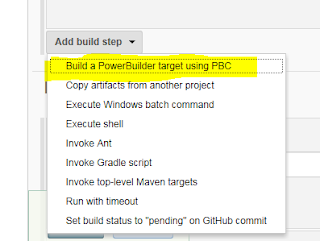 In the form that appears, select the version of the PBCompile that you just created earlier.

You'll also need to add the command line arguments to pass to the PowerBuilder Autocompile utility.  You can get those from the first page of the project object in your PowerBuilder target. 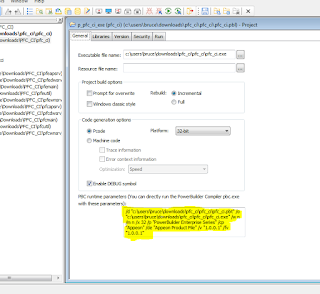 hese plugins provide the same capability as the first two batch files from the previous blog article, namely running OrcaScript to create PBLs from source control and then running the AutoCompile Utility (PBC170.exe) to create the executables and PBD from the PBLs.

What we're going to do now is replace the third batch file, the one that copies the EXE and PBDs into the build folder.  Jenkins has some built in capabilities that make this simpler that I didn't demonstrate in the previous article.

The first thing we're going to do is to tell Jenkins to archive off the EXE and PBDs (Jenkins calls them "artifacts").  To do this, create a Post Build step and select "Archive the Artifacts" 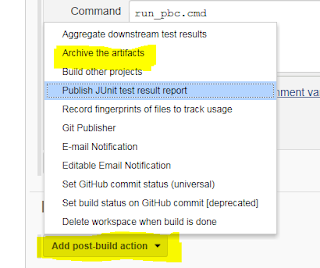 In the new step that is added, enter the following in for the "Files to Archive".

The syntax is Apache Ant include fileset.  This particular setting tells Jenkins to find all of the EXE and PBD files in the workspace - including in any subdirectories - and copy them into the archive location.  When it does so it preserves the subdirectory structure, something we'll deal with in the next step.

Now that we have the PBDs and EXE in the archive location, we want to use the Copy Artifacts Plugin to copy them to the build folder.  First we'll need to install the plugin.  Go back to the Manage Jenkins  -> Manage Plugins page, but this time select the "Available" tab.  Because there are a lot of plugins for Jenkins you might want to use the Filter option in the upper right to pear down the list.

Once again you'll need to restart the server before you can use the plugin.

After the server has been restarted, create a new project.  We'll fire this project off after the build is complete from our original PowerBuilder project.  You might simply name the new project as the original project name with an " - Output" suffix, as I've done here.

The only thing we're going to do with this new project is create one build step.  Do that, and choose the new "Copy artifacts from another project" option. 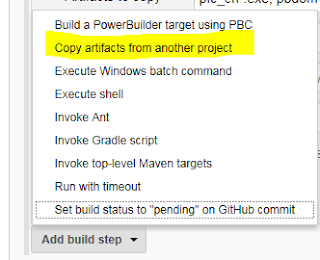 Go back into the original PowerBuilder project.  We need to add another Post Build step. This time select "Build other projects". 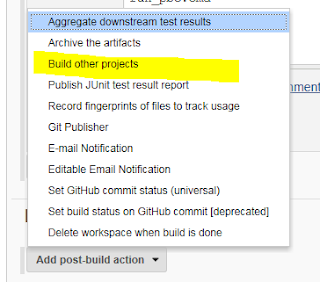 And in the new post build step specify your "output" project as the project to run after the PowerBuilder project completes.

Run a build of your PowerBuilder project just to verify that it's all working.  You'll notice some differences.  In particular, the build information now shows the artifacts that were created and the "output" project as a "Downstream Project". 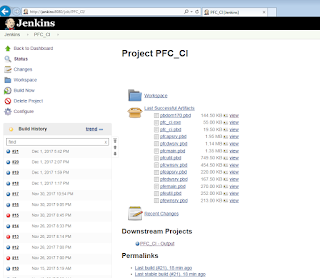 The build information from the "output" project isn't particularly interesting, but we can check out build folder and see that the build files are being created and stored correctly. 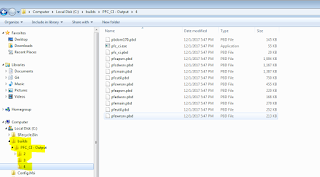 This all works great.  The only issue is that (currently) there are a number of options available in the PowerBuilder target that aren't supported by the command line arguments for the PowerBuilder autocompiler.  Well we have some other options.  One is to user PowerGen, and the other is to use the command line options of the PowerBuilder IDE itself.  Fortunately, I also created a plugin for each of those as well.  (That was true when this article was originally published.  It was addressed in later releases of PowerBuilder.)

If you'd like to use PowerGen instead, grab a copy of the PowerGen plugin.  You'll need the powergencompile.hpi.  Install it as you did the other two plugins above.  Similarly, go to the Global Tool Configuration and create a PowergenCompile installation.

Like the other two plugins, the only thing you need to do here is give the installation a name and provide a path to the PowerGen executable (Pwrgn17.exe).

Go back into your project, delete the PBCompile step and add instead a PowerGen step. 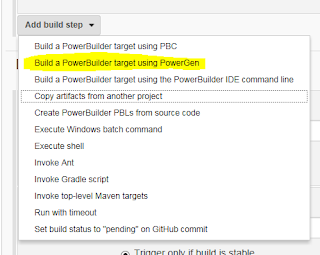 And in the form that appears there selection the install you just created and the relative location of the PowerGen project file you've created for the project.

You'll need to save or copy that PowerGen project file in the workspace.

There's a couple of caveats with this approach as well though, both of which I've shared with the folks who make PowerGen. 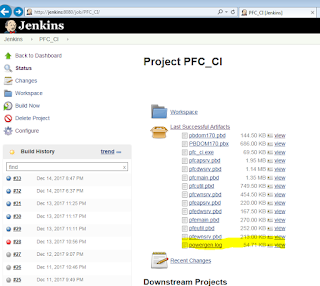 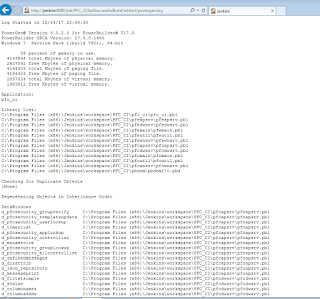 (The above was true at the time the article was originally written.  PowerGen was later revised to address those caveats).

Note that PowerGen also has the capability to generate PBLs from source code like OrcaScript does.  I haven't looking into making use of that capability as I already have OrcaScript doing that for me.

Go back and replace that last build step with the new "Build a PowerBuilder target with the PowerBuilder IDE command line" option that appears. 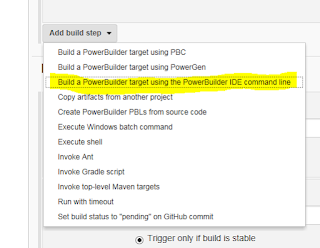 And in the form that appears, select the version of the install you just created and indicate the relative location of both the workspace and project file.

Note that the workspace file is a new requirement, and something that isn't part of the source pulled over from the source control server.  You'll have to copy or create a workspace file in the Jenkins workspace in order to use the PowerBuilder IDE command line approach.

When I'm following these instructions I do not see the orcascript configuration available in my "Global Tool Configuration" window.

I'm able to successfully install both plugins. I can see and configure the PBCompile in my global tool config but not the orcascript. Is there something I'm missing?

Hi Bruce,
I have the same problem as Peter.
There also no build step "Create PowerBuilder PBLs from source code" available.
Do you know how to fix this?
Thank you.

I did some updates on the source for the plugin, and if you use the latest source they may be an issue. To get it working until I fix the source, I would use the batch file approach I mentioned in the previous article (https://community.appeon.com/index.php/articles-blogs/tutorials-articles/2-powerbuilder/175-continuous-integration-with-powerbuilder-2017-bonobo-git-and-jenkins).

Hi Bruce,
Your effort is much appreciated. It is timely to a major "build automation pipeline migration to Jenkins" project I am currently prototyping. Thank you

Two questions about ORCAScript PlugIn Build configuration:
1) For PBT file: Are these assumed?
scc connect offline
scc set target "" "refresh_all importonly"
2) I don't see options to Create PBLs or other commands such as:
a) create library
b) build executable
c) build library
d) set exeinfo
Are you planning to add these?
Or
Is current best practice to do them as BAT jobs in separate CMD pre and post build actions ?

1. You enter the name of the PBT file in the build configuration:

2. The plugin is hard coded to do " scc refresh target " + refreshType

That rebuilds PBLs from source.

The assumption is that you'll then use the PBC plugin to do the compile from the PBLs, so that's where the OrcaScript plugin stops.

The point of the plugins is to avoid having to write batch files. In the case of the OracSript plugin it creates an orcascript file for you and then runs it. The PBC plugin just runs the PBC utillity directly.

Question: All we are after in the next step is PBD and EXE packaging. Since The PB Project painter doesn't have a "Rebuild None" option won't it just repeat what was just done with Refresh Target?

(Worse yet, since it does NOT have a "3pass option it might nuke what was just done)

**In our case Refresh Target takes about 100 min"

If you have the project options set to "incremental" I would hope that would limit the amount of duplicate work. I don't know for sure though as I really don't know how PBC works internally and how it would know what should or should not be recompled as a result of the incremental setting .If you have it set to "full" then it would do another, likely unnecessary, recompile.

Yes, refresh target can take a while with a larger application.

From the IDE Project Painter on incremental perspective. I always observe all objects iwhirl by n the output window, even if nothing changed.....

Maybe Roland Smith or one of the Appeon engineers could comment .....

Documentation says nothing on this subject:

Does it just empty and refresh the pre-existing ones?

We do as well. We're just a bit paraniod.

PS: Refresh Target for SVN and GIT drivers create and populate a temporary PBG file for each PBL. They use the directory contents of the corresponding folder ws_objects\pbl.src folder to write the PBG.
This is how they 'shoehorned' the new PBG less (haha) process onto the the older PBG based one.

There are no comments posted here yet
Load More